Afraid of the Dark

Afraid of the Dark

Afraid of the Dark is the first challenge in the Five Nights at Freddy's VR: Help Wanted DLC Pack Curse of Dreadbear. It takes place on a graveyard, littered with pumpkins carved with sinister grins; some with faces resembling animatronics. It also contains multiple attractions such as Foxy's Pirate Ride.

Each level has its own unique mechanic, considering the first level is surviving from the Plushkins, and the second level, by shooting multiple targets accurately to win the game.

Afraid of the Dark features the Plushkins; the original three Plushbabies wearing masks patterned after Balloon Boy, Chica, Foxy and Freddy Fazbear, using masks from the Spooky Mansion stage, Trick or Treat. It also features Foxy, with the appearance of a pirate captain.

Each of them displays unique behavior because of the different mechanics that the mini-games display.

Plushkin Patch is a minigame that plays exactly like the Plushbabies' stage in Dark Rooms, taking place in a graveyard with pumpkins and the Plushbabies dressed up with masks of different characters. The player is again equipped with a flashlight in order to aid the player to look out for the Plushkins. The goal is to survive until 6 AM.

The Pirate Ride is a pirate-themed shooter ride, which Foxy appears in this stage, taking the appearance of a pirate captain. There, the player is armed with a handheld cannon and must shoot targets in each gallery themed around Foxy as a pirate as he sails the sea, battles a multiple sea monsters and explores underwater.

If a player manages to hit all targets in a given set, they will activate a bonus round in which all targets reactivate, effectively allowing the player to double their score for the room.

The possible points per stages are as follows:

At the end of the ride, the player is given a ranking based on their score. They are as follow:

There are also three Helpys in the ride that lead to different paths. The player has to shoot them to go in a different direction. These opposite paths lead to rooms where the player can actually get jumpscared by the Jack-O-Bonnie and Jack-O-Chica. If the player does not shoot the door buttons quickly enough, they will attack, ending the night run. One leads to a hallway-like room with multiple doors leading to certain dangers. Another leads to a kitchen with just Jack-O-Chica. Once the player make it through the second secret room, they will get sent back to the beginning, meaning the player can obtain more points giving an advantage to get a higher rank. The third leads to a mechanical room full of red buttons, with  Jack-O-Bonnie walking towards the player.

The Corn Maze is situated in a Halloween-type maze made of mainly wooden fences, multiple decorations such as character signs and pumpkins.

The area is patrolled by Grimm Foxy, acting as the main antagonist of the minigame. Similar to Pizza Party, this minigame is a free-roam game, which means the player can walk unlike the other minigames, which situates the player in one room or staying in the same place. The player's goal is to escape the maze, with four gates to leave the area, colored red, blue, yellow, and green, and can only be opened if the player has the key of the same color. Once the player collects a key, a symbol for the key will appear on their flashlight: A spider for the red key, A tombstone for the green key, A book for the blue key, and a pumpkin for the yellow key.

As Grimm Foxy patrols the area, he will make loud and uncanny footsteps, scrap his scythe on multiple randomized things, and sing to himself similar to Foxy in the first game. He is attracted to loud sounds. If the player disturbs something that cause loud sounds or make loud sounds, he will run to the location of the sound. If he ever sees the player in his sight, he will charge at them with incredible speed and attack. The player can hide from Foxy by using the character signs throughout the area. While ducking around corners and such will not break Foxy's chase, using a character sign will immediately call him off.

One of the scenes in Pirate Ride. 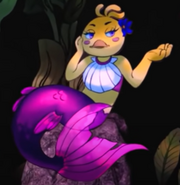 A screenshot of the cutout of the mermaid Toy Chica from Pirate Ride.

A screenshot of the corn maze with Grimm Foxy.
Community content is available under CC-BY-SA unless otherwise noted.
Advertisement