There is a rare chance that a physical Helpy will appear in the level select room. He stands beside the player's monitor, having no effect to the gameplay. However, it gives the player a hint towards the secret button beside the monitor.

In a rare occasion, a coffee machine might spawn on the end of the player's desk in the FNaF 3 levels. This is a reference to one of Scott's old games, The Desolate Hope.

He also appears in the Prize Counter, placed near some boxes on the ground.

The coffee machine as seen in the FNaF 3 level. 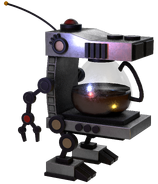 The model of Coffee.

Coffee seen in the Prize Counter

In a very rare chance, the player can find an animatronic endoskeleton (Endo-02) standing in the office of the FNaF 2 levels. This is a throwback to the easter eggs found in the original Five Nights at Freddy's 2, which also has Endo-02 appearing in Prize Corner or the left vent. However, he causes no gameplay effect and will only stand there for the entire night. Endo-02 can also sometimes appear below the player climbing up the vent in Mangle's Vent Repair level.

In the Plushtrap or Nightmare BB's Darkrooms level, there is a chance that Minireena will appear standing by the doorway. Similar to most easter eggs, she doesn't have any gameplay effect.

In the Night Terrors - Circus Baby, there is a chance that Bidybab will appear standing in front of the flashlight on the floor, and inside the closet [1]. Similar to most easter eggs, she doesn't have any gameplay effect.

The Exotic Butters were present in the Prize Counter after the player collects all 30 coins. It serves different teasers throughout updates.

While playing in hardmode, Ennard's vent repair gains a large amount of withered, broken and distorted versions of other characters, sitting around as props. Amongst these characters are also various props, such as Chica's Cupcake, and Nightmare Endo. In total, there are 70 different props, including broken animatronics & animatronic parts, the previously mentioned character props & Nightmare Endo, distorted plushies & even the player's hand.

A render of Nightmare Endo who appears in the level.

A render of a broken Bon-Bon that appears in the level.

A render of a broken Bonnet that appears in the level.

Renders of the broken animatronics that litter Ennard's level.

In the Curse of Dreadbear DLC, when 3 clown posters can be seen in the "Game Won" room, the player can use the darts to shoot them. Once done, the room will turn purple and the banner will say "IT'S ME".

When it first released, there weren't many Easter Eggs hidden in Five Nights at Freddy's AR: Special Delivery, but of the ones in it booping Freddy's nose in the shop will result in the honk that's available through most of the FNaF games.
However, with the addition of characters and skins added later, minor eastereggs would appear when opening the Workshop, showing alternate variants of certain characters, ranging from the removal of Toy Chica's beak, to VR Toy Freddy appearing in his attack form, and more.

Freddy In Space 2, while not having too many easter eggs, does have many secrets and references.

In Cosmic Freeway, the player has a high chance of seeing a small space ship in the background. Said spaceship houses Chipper, his son Tyke and the Termite King. These three characters were the primary main characters of Chipper and Sons Lumber CO., one of Scott's old games and the predecessor to FNaF.

In Freddy in Space 2, each level, with the exception of Final Stage, have at least one secret boss hidden away behind false walls. Each boss is a reference to either a famous Youtuber, or a boss from FNaF World. Said Bosses are; 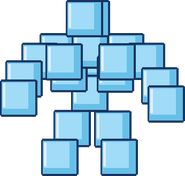 In the beginning of Freddy in Space 2, Freddy's ship is seen with the phrase "YƎVEY" written on it. This is a reference to a popular image of Scott Cawthon that was mirrored, making his shirt say "YƎVEY". The phrase has become a common joke amongst people in the FNaF subreddit, even being used by Scott himself after the mod team "threatened" to ban him after he posted a UCN troll game despite promising there wouldn't be one.

On numerous occasions in the past, Scott has used the phrase "hold my non-alcoholic beverage" in place of the common term "hold my beer", one example being when he talked to Steel Wool about a complaint he had with the original version of Funtime Foxy's level. Freddy in Space references this phrase in the beginning cutscene, where Freddy "enjoys a cold non-alcoholic" while seen drinking from a can.

L.O.L.Z.H.A.X, the main villain of FIS2 is actually a reference to the username Scott uses for his various troll games. The user supposedly leaks the games early, when in reality, the majority of the time, it's one of Scott's older games with Freddy's face plastered onto the main character.

Golden Freddy can be used to destroy the Giant Terminator Chica by pressing a large yellow button. Doing so will give the player multiple pouches of 250exp and a large fountain of Green Gems.

Security Breach: Fury's Rage has a few minor eastereggs within the game.

Afton, otherwise known as Scraptrap, was an antagonist in Freddy Fazbear's Pizzeria Simulator. Scraptrap appears in Security Breach Fury's Rage as a background character. His placement may be a direct reference to Pizzeria Simulator's Rare Screens which show the various antagonists in an allyway.

In the beginning of Fury's Rage, Scott within his dream is seen wearing a grey shirt with the phrase "YƎVEY" written on it. This is, of course, a reference to a popular image of Scott Cawthon that was mirrored, making his shirt say "YƎVEY".