Triple A Fazbear Wiki
Register
Don't have an account?
Sign In
Advertisement
in: Mechanics, Gamemodes, Special Delivery,
and 3 more

Events are activities and challenges hosted by the game for certain reasons, namely, seasonal events. Some events feature new time-limited animatronics, and players will be given prizes when certain goals are made if challenges are given. Events are first introduced in the franchise in Five Nights at Freddy's AR: Special Delivery.

Get Your Streak On Challenge 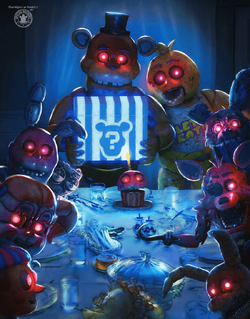 The event was hosted on Thanksgiving 2019 (November 29th). In this challenge, the player must get their streak up by capturing animatronics without dying on that day. The player will be given Faz-Coins if they reach a certain number of streak. The players will also be rewarded if a number of participants log on.

The goal of 250,000 is reached at last, and the players are all given 50 Faz Coins regardless of streak level.

An event is held on Winter 2019, and has introduced two new time-limited animatronics: Toy Chica and Freddy Frostbear. Throughout the event, the player is able to encounter them and purchase and obtain items related to them, such as Plush Suits, CPUs, and lures.

The UI of the game is also decorated to fit with the theme of Christmas, such as map having snows, and the shop being decorated with Christmas lights. This is also the first event to have a new feature, where player can receive gifts every 4 hours.

In January, just before the event came to a close, Toy Bonnie was added on the 24th and stayed until the 29th. 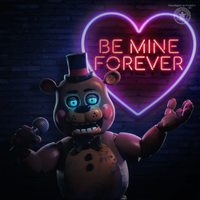 The event is on Valentine 2020 (14 February). This event is first teased on Dawko's WWF Charity Stream when CEO of Illumix is being interviewed. The event has brought in Toy Freddy as an event-exclusive animatronic. Throughout the event, the player is able to encounter him and purchase and obtain items related to him, such as Plush Suits, CPUs, and lures.

Similar to the Winter 2019 Event, the game is decorated in the theme of Valentine, such as map color change to pink, hearts used to decorate user's icon, and the look of the Shop section has been changed as well. 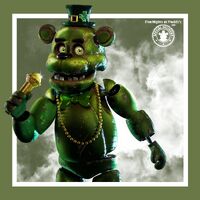 The event is on St. Patrick Day in 2020 (March 13rd). This event introduced a new Skin system for the animatronics, with a new Shamrock skin for Freddy Fazbear. The overall UI of the game is also decorated in the theme of St. Patrick Day. 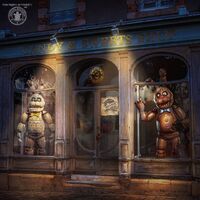 The Arcade Mayhem Event was hosted on the month of May 2020, with the theme being video games. Three new skins for the Toy Animatronics and a new character are brought to the game for the event, all of them being VR Toy Freddy (on May 7th), Highscore Toy Chica (on May 15th), System Error Toy Bonnie (on May 22nd), and lastly 8-Bit Baby as the new character (on May 28th).

The Wasteland Event was an event hosted on the month of June 2020 based around the idea of radioactive creatures and beings. Two new skins are brought to this event, both of them being Radioactive Foxy (Added on June 11th) and Toxic Springtrap (Added on June 18th). 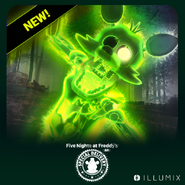 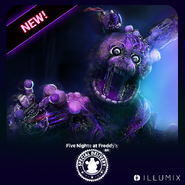 The Summer Event 2020 was hosted on the months of June and July. Despite the name, the theme of this event is focused moreon America's Independence Day. The skins added for the event are Firework Freddy (Added on June 26th) and Liberty Chica (added on July 2nd). 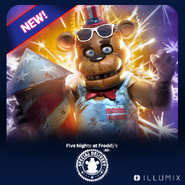 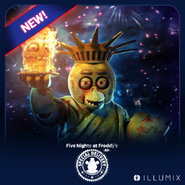 The Halloween Event is an event for the famous holiday hosted in the month of October. This event started out with the new character addition of Jack-O-Chica (added on October 9) followed by Jack-O-Bonnie (added on October 15), and then a skin character in the form of Catrina Toy Chica (added on October 22) and finally Plushtrap to end it off (added October 29). Despite ending on Plushtrap, the event actually continued until November 11th in celebration of Plushtrap's exclusive merchandise line. 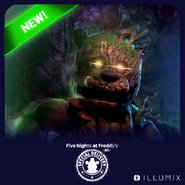 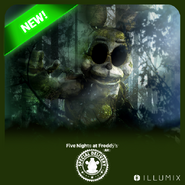 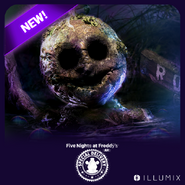 The Winter Wonderland event is the 2020 Christmas event taking place in the month of December. Originally, the event was gonna air on the 3rd, following the trend of events starting on a Thursday, however, it had to be delayed by a day because of bug fixes. The event started out with Freddy Frostbear's very first skin in the form of Black Ice Frostbear (added on December 4th) followed by Arctic Ballora (added on December 10th), then followed by Frostbite Balloon Boy (added on December 17th) and finally rounded off by Frost Plushtrap (added December 24th). The event is unique in the sense that it also brought back Freddy Frostbear as a part of the event.

The Heart Stoppers Event took place in February as a celebration for Valentines Day. The event started with two new skins, being Black Heart Bonnie & Heartsick Baby (added February 4th). This event also saw the permanent return of Toy Freddy on February 19, 2021. During this event, the first Photo Booth Challenge was held from February 12 to February 17. 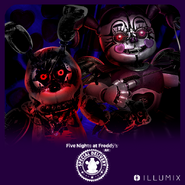 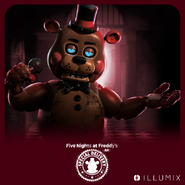 The Ancient Equinox took place at the beginning of March, celebrating the Aztec gods and culture. The event started off with two new skins, being Curse and Serpent Mangle (added on March 5th). During this event, the Spring Photobooth Challenge was held from March 10 to March 21, with this being the first themed challenge; requiring you to use the newly added frames. The event lasted the entire month of March, ending on March 31. 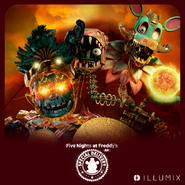 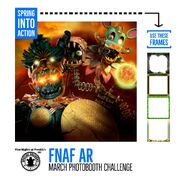 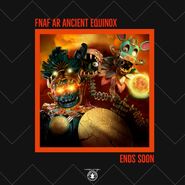 The Hop Chocolate Event was the Easter event for 2021 that took place in April, starting on the infamous April 1st, otherwise known as April Fool's Day. The event introduced the new skin of Melted Chocolate Bonnie, a new version of the original Chocolate Bonnie. The event ended on April 14th. 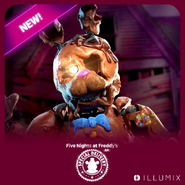 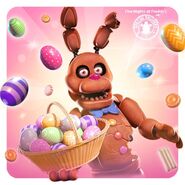 The Scary Tales Event was an event based around the classic Fairytale Little Red Riding Hood. The event was initially meant to begin on April 15th, but had to be delayed due to bug issues, and ended up beginning on April 19th. Before the event started however, the skins Little Red Chica and Big Bad Foxy (eventually added on April 22) were prematurely leaked and revealed. The event suddenly ended on April 29th 2021. 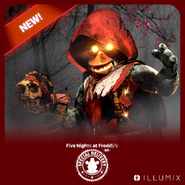 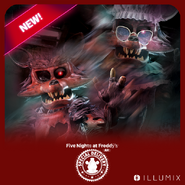 The Wicked Tides Event was an underwater themed event that took place in May of 2021, two days after the Big Spring Gameplay Update. The event was initially teased in a similar fashion to one of AR's first teasers, with bits and pieces of the teaser slowly being shown off like puzzle pieces. This trend continued throughout the event. The event started off with the skin Dark Water Bare Endo (added May 20, 2021), followed by Sunken Toy Bonnie (added May 27, 2021). The next skin, Piranha Plushtrap, was delayed to Monday, June 7th due to fixing bug issues with its environment. The event ended off with a Photo Booth challenge surrounded around using the new water-themed frames.

The Screampunk Event is a steampunk themed event that took place in June of 2021. The event, along with it's first skin, was initially teased on June 16th, however it was delayed by a week due to that same day being the day that Scott Cawthon announced he'd be retiring, and Illumix wanting to "give everyone time & space this week". On June 24th, the event started with the addition of the Clockwork Ballora skin followed by Aeronaut Toy Freddy (added on July 1), then followed by Jetpack Balloon Boy (added on July 8). The event ended with the "Up, Up & Away!" photobooth challenge, starting on July 9 and ending on July 14.

FNaF AR has had it's fair share of events, but it has also included some very short events, that center around old characters and skins returning, whether it be to celebrate a new line of merchandise, or to just be simple filler to allow Illumix to focus on other upcoming events.

This Frostbear in Spring Event featured Freddy Frostbear reappearing in Special Delivery in Spring 2020. The event lasted from April 3rd to April 8th, which is a week long.

For a short few days, Chocolate Bonnie returned to FNaF AR to celebrate his merchandise wave that released with the first wave of Special Delivery merch. He arrived on June 23rd and only stayed for about 3 days before leaving to give the spotlight to the also ongoing 4th of July Event.

On July 16th 2020, Illumix held a mini event celebrating the permanent return of Toy Bonnie, who was the first character to join the normal rotation after previously being an event exclusive.

Blast from the Past Event (October 2020)

The Blast from the Past Event was a week long event that centered around the return of characters and skins. The returning cast included Freddy Frostbear, Toy Freddy, Mangle, Chocolate Bonnie and Flaming Springtrap. The event started on September 25, 2020 and ended October 1, 2020.

The event had a second half of The Mashup began the day the first half ended. This batch of characters included Shamrock Freddy, Radioactive Foxy, Toxic Springtrap, Broiler Baby and 8-Bit Baby. The second half started October 1, 2020 and ended October 8, 2020.

As a celebration for their recent merchandise line, the Arcade Mayhem skins and 8-Bit Baby make their grand return to the game. The event lasted from August 23 to August 25, 2020.

Blast from the Past Event (January 2021) 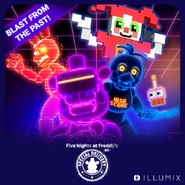 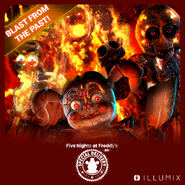 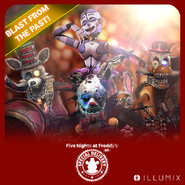 The Shamrock Shakedown Event was a Blast from the Past style event that took place in March 2021. The event saw the return of Shamrock Freddy, Radioactive Foxy and Toxic Springtrap.

Character Centered Blast from the Past Events

Blast from the Past gained a third part that began on July 16th, 2021 and was called the "Freddy Festival". The event saw the return of Golden Freddy, VR Toy Freddy, Black Ice Frostbear, Woodland Toy Freddy, Freddy Frostbear, and Shamrock Freddy. Each of the following weeks would be dedicated to at least one of the Freddy's. The event ended abruptly on August 12th with neither Frostbear or Shamrock Freddy getting their own section in the event.

Springtrap Spree is a mini Blast from the Past style event centered around the return of 3 of Springtrap's skins, Toxic Springtrap, Flaming Springtrap and Curse. The event started on August 13, and would dedicate each of the following weeks to one of the three skins.

Plushtrap Party is a mini Blast from the Pasty style event that began on September 2nd 2021, and saw the return of Plushtrap's two skins, Piranha Plushtrap and Frost Plushtrap. The event was the third character centered event, and follows the same theming as the two that came before it.