The Faz-Cam and Fazerblaster are tools used by Gregory in Five Nights at Freddy's: Security Breach. Both are used to stun certain enemies for a short amount of time.

The Faz-Cam is a polaroid camera decorated to look like Glamrock Freddy, with his coloration and his blue & red patterns. The flash lens on the camera are built into the ears, and the button to take a picture is on the side. The Faz-Cam is found in a security office in Monty's Gator Golf, and becomes a permanent tool once obtaining it.

The Fazerblaster is a small silver raygun with some red highlights. The raygun can be found in Fazer Blast, and is obtained first by entering the Fazer Blast arena. Once the player beats the Fazer Blast minigame, they'll then be able to obtain a golden variant of the gun which they can use outside the arena.

The two tools are both used to stun enemies in different ways. The Faz-Cam can stun a large group of enemies at once, but has a long recharge time. The Fazerblaster can only stun one enemy at a time, but has five shots before needing to recharge. Both weapons must have the enemies facing the blast for them to work, with the Fazerblaster specifically needing to be shot directly in the animatronic's face. If the player is able to find it, they'll be able to upgrade the Faz-Cam to have a shorter recharge time.

Some animatronics cannot be stunned by either weapon, specifically Montgomery (before being shattered), Roxanne (after being shattered), both forms of the Daycare Attendant, the Wind-Up Music Man toys, DJ Music Man, Vanny, Blob and Burntrap. A render of the Faz-Cam from behind.

A render of the golden Fazerblaster. 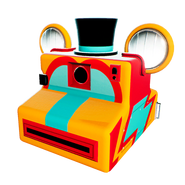 The artwork for the Faz-Cam when obtaining it. 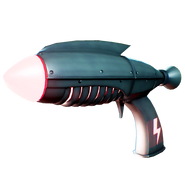 The artwork for the Fazerblaster when obtaining it. 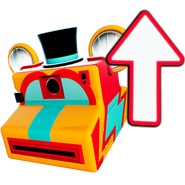