The Faz-Watch is the first piece of equipment Gregory gets in FNaF: Security Breach and acts as the primary mechanic of the game.

The Faz-Watch is a small plastic watch decorated to look like Glamrock Freddy, being the same shade of color as him and having his black tophat with a blue stripe. The watch has a large screen on the front of it that is used to view the cameras, messages, missions and a map of the Pizzaplex. The watch is first given to Gregory from Glamrock Freddy so the two can communicate with Vanessa noticing them.

The Faz-Watch interface has four main tabs; Cameras, Map, Missions & Messages. Each can be viewed at any time, however the Map and Cameras must be upgraded and acquired at certain points before they are available. Camera upgrades are found in gift boxes like other upgrades and collectables, and the two maps needed are given out by Map Bot in the Atrium and Parts & Service respectively.

Missions are displayed as separate drop-down menus, with each mission holding a checklist of each step needed to complete the mission. Messages are scattered around the map, and can be viewed in the Faz-Watch. Each message acts as a drop-down menu similar to the missions, with the message title being displayed before opening the menu to show the message itself.

The camera system allows the player to view a selection of cameras near their current area. They display all nearby enemies, and the camera UI glows red when motion is detected on a specific camera. Most locations in the Pizzaplex hold only 2-6 cameras, or none at all. Finally, the map shows a rough layout of the Pizzaplex, the location of Gregory and the location of Freddy. The map is split into two halves; one being the main Pizzaplex itself with the Atrium, Lobby & all the different attractions, and the other being the utilidoors that run through Parts n' Service. 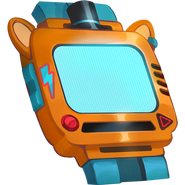 The Faz-Watch's artwork displayed when obtaining it.

The old UI and look of the Faz-Watch.