The gameplay of Special Delivery can be mainly divided into 3 main sections: the map, the camera and the workshop.

Defeating an animatronic will give the player some Remnants some Parts, and some XP rarely even their Plush Suits, CPUs and MODs to use in the workshop section. It will also increase the player's streak. While the streak will make the animatronics enter "Rampage Mode", which means they will be more difficult to defeat, defeating them will give the players more rewards.

When there is no animatronic around, the camera can be used to collect Remnant. The player can collect them by using the flashlight to absorb them, or physically walk towards them to avoid the Dark Remnant carefully. If too many Dark Remnants are absorbed, the player will encounter RWQFSFASXC.

A augmented reality video game for the Five Nights at Freddy's series was rarely mentioned by Scott Cawthon before 2018. However, Scott did mention that he was planning to make a AR game when he announced that Five Nights at Freddy's 6 is "canceled". He also apologized for not making the AR game along with other projects like console releases happens, and will seek for a bigger publisher to help out these projects.

In Dawko's interview with Scott, he had said that the AR game is in early stage production with another unknown company. Some time later, he made another update regarding future projects including the AR game. While he didn't said much about it, he said that "the impending doom of something hunting you will keep you up at night".

On August 8, 2019, the fifth anniversary of the Five Nights at Freddy's series, Scott made another update thread after the release of Five Nights at Freddy's VR: Help Wanted. He revealed the company developing the game is called Looking Glass (who changed their name later to be Illumix). He praised the graphics they had done for the game for being fantastic, and said that the estimated release date for the game will be October 2019.

About a month later, a Reddit user called "5541ggnik001" (which reads "lookingglass" from right to left) posted a teaser video for the AR game, and created a website for the game as well. People were not sure if the trailer was real or not. A few days later, however, a Snapchat filter was leaked and found, with Freddy's face and the game's logo. The game was revealed to be named Five Nights at Freddy's AR: Special Delivery, and the logo matched with the one that appeared in the teaser trailer as well. The filter was later deleted (but was added back after the proper announcement).

Not long after, an announcement trailer was posted by the same user who changed their username to "Illumix Official", and the website was updated with more details and the ability to pre-register. The second teaser was also posted on October 16th along with the early access tickets to those who had pre-registered. More infos were then revealed a week later, revealing the game will be free and that it would be delayed until before Thanksgiving 2019.

A while later, a puzzle hunt was set up by Illumix, where they posted a puzzle piece from a teaser every day. It lasted 10 days, and not long after the final piece is revealed, the game was revealed to be on App Store and available for download. However, the game required an early access ticket to play, which they started giving out after a few hours. The game was then made to be a public early access one day later, and was officially launched November 25th, 2019

After the game's release, updates have been pushed out constantly, bringing new skins and characters, features, events and more. Furthermore, Illumix had also created their own AR engine for the game, which increases Android device compatibility and allows more unique features such as characters hiding behind objects in reality (RWQFSFASXC for example), as well as Mixed Reality features (Plushtrap for example). 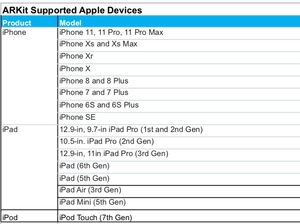