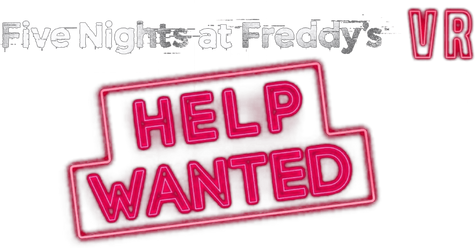 The game focuses on the player surviving minigames based on segments from previous games, as well as new ones, such a repairing animatronics, revisiting the first three games, repairing ventilation systems, and more. It also features many returning characters and locations from the past games and different game segments the player can pick from. There is also a story available through collecting hidden cassette tapes throughout the game. The game is a canonical continuation of Scott Cawthon's original series.

A non-VR required update of the game was released on December 17, 2019. Unlike its original VR counterpart, it is available on more gaming platforms outside of Windows and PlayStation 4 at a later date, such as Nintendo Switch which was released on May 21st, 2020, Oculus Quest on July 16th, 2020, iOS and Android on October 27th, 2020, as well as Xbox One on October 29th, 2020.

Sometime after the event of FNaF 3, in an attempt to counter their reputation as dangerous (caused largely by the events of the original Five Nights at Freddy's saga), Fazbear Entertainment has commissioned the Freddy Fazbear Virtual Experience, a virtual reality game based on the legends about the various locations. The game was originally developed by the company "Silver Parasol games". During development, the development team was sent a box full of parts from the old animatronics, particularly their PCBs. Instructed to scan these into their system to expedite the game's development. They inadvertently released a malevolent entity in the form of a non-animatronic Spring Bonnie costume into the game. The player can find glitchy cassette tapes scattered throughout the game, which contain logs recorded by a female employee working on the game. The story tells the story of how an employee named Jeremy encounters the anomaly and becomes increasingly disturbed, talking to himself, and losing his fear response.

After an unknown incident involving Jeremy, the company faces a lawsuit and have to quit development on the game, being informed that development will now be passed on to a new team. The female employee tries to delete the files, but is not able to because the anomaly attached itself to her logs. She then leaves one last strange message reintroducing herself, telling the player there is a way to hopefully delete the anomaly by allowing it to manifest and performing a hard reset on the game. The player takes the role of a female beta tester for the second company, finding Tape Girl's tapes and allowing the anomaly to slowly manifest.

As the tapes are gathered the entity becomes more real and inches closer to the player when in the level select screen. After all tapes are collected, the anomaly will occasionally attempt to escape the game by possessing the player. Through performing the right actions, player will find themselves in front of a metallic door. Peeking through an opening in the door, the anomaly will shush the player before slowly backing away. After the cutscene, the anomaly is rendered a seemingly harmless, glitchy green rabbit plush toy.

See also: Curse of Dreadbear, the page all about the DLC.

Extra content is adding to the Freddy Fazbear Virtual Experience in the spirit of Halloween. On occasion, in the Halloween hub, the player can see the silhouette of the anomaly dancing off in the distance. In the Corn Maze minigame, the player must find one of four keys and escape the maze while hiding from Grimm Foxy behind cardboard cutouts. If the player finds all four keys throughout the maze, a bell will toll, and a fifth key will appear in the map. If the player manages to find the final key, they will be able to access the cellar, where they will find a messy version of the Game Win area, with a white and brown rabbit mask sitting on the desk.

The rabbit mask becomes available in the prize corner. Wearing it while holding the plush toy of the anomaly will cause the player to start speaking in a female's voice. She speaks fearfully to the plush as if having a conversation with it, telling it that no one suspects anything, that she will not let it down, and that "it will be fun."

Upon turning on hard mode, it displays strange effects to the animatronics and surroundings around the player.

A virtual reality video game for Five Nights at Freddy's series was rarely mentioned by Scott Cawthon before 2018. However, Scott did mention that he was planning to make a VR game when he announced that Five Nights at Freddy's is "cancelled". He also apologized for not making the VR game along with other projects like console releases happens, and will seek for a bigger publisher to help out these projects.

In Dawko's interview with Scott, he had said that the VR game is in production with another unknown company. He also received a tech demo from the company and liked it. The company was later revealed to be Steel Wool Studio after Scott updated his post on Steam Community. He mentioned that there will a gameplay section similar to the Funtime Freddy repair section in Sister Location, and the player will be able to see the FNaF 1 animatronics performing on stage as well.

A few months later, ESRB's website had leaked the official title of the VR game, Help Wanted, as well as the description of the game. The game will also be released on PlayStation 4 VR. In one of Dawko's livestream, Scott commented and mentioned that the game will be out in a few months. On March 11 2019, Scott posted a teaser for Help Wanted on his website, with a bunch of other gameplay screenshots hidden. The teaser was later taken down however due to the art being questionably traced from fan-made renders (noticably Funtime Foxy and Spring Bonnie), and Scott sent a apology post on Reddit while revealing some gameplay details about the game.

In PlayStation's State of Play livestream which was hosted on March 25th, a reveal trailer for Help Wanted was played, and the release date was confirmed to be on Spring 2019. A full box art of the game was posted on Scott's website a day later, with Nightmarionne replacing Spring Bonnie, and an official model of Funtime Foxy replacing the old one. A demo version of the game is also available in PAX East 2019 too, with the gameplay section for Five Nights at Freddy's, Bonnie repair section, and the Vent gameplay.

In May 4th, 2019, the Steam page and PlayStation pages are created, revealing more screenshots of the game, as well as new characters to appear, like Bonnet. A few weeks later, on May 21st, 2019, a demo version/beta version was released to some YouTubers. Seven days later, on May 28th, the game was fully released.

On December 17, 2019, a non-virtual reality version is added into the game. Additionally, two notable additions were the loading screem featuring Helpy on the bottom-right; and a teaser for a new game.

After long term of silence, Steel Wool confirmed that not only will the game be available on Quest, but will also be on Xbox One and Nintendo Switch. These ports will be available in 2020. A store page for the game was mistakenly uploaded on Nintendo page on 1st May. Steel Wool took the page down, while confirming the Switch port will be available in a few weeks, which is later confirmed to be May 21st. They also confirmed that the Xbox port is still in the work and the Quest port is very close to finishing. The latter was then released on July 16th.

iOS and Android port as well as long awaited Xbox One port of the game were released on October 27th 2020 and 29th respectively. In addition, Steel Wool added a mini-game titled Princess Quest exclusively for the mobile ports. Physical release of Help Wanted for PlayStation 4, Xbox One and Nintendo Switch were also published and released by Maximum Games on December 15th 2020.

Since the day Five Nights at Freddy's VR: Help Wanted was released, the sales have been incredible. The game was ranked as the number one top selling VR game on Steam not long after it was released, and has been keeping its place for a long while. The rating of the game is "very positive", with almost all the players recommending the game. It is also the most downloaded PSVR game in May (#1 in US, and #3 in UK).

The game received an average score of 81 on Metacritic, being generally favorable. Among the critics in the list, Jordan Devore from Destructoid has given the game a score of 9 out of 10.

Vandal in Spain rated the game as 8/10, complimenting the recreation of the levels in previous games in virtual reality as well as the audiovisual of the game. They also said that the collectibles encourage the player to explore their surrounding. However, according to their words, the difficulty of some levels can be frustrating, and the lack of translation can be a problem for many. They summarized their criticism with the following quotes:

In addition, 73 out of 100 is the score Hobby Consolas gave. They praised the atmosphere which is enhanced by the sense of depth of the VR headset. However, the control with the DualShock (the controllers for PS VR) tends to become chaotic. They also mentioned that some levels may seem to be too simple.

The website Multiplayer.it gave the game a score of 7.0 out of 10. They said that the game is the best installment in the FNaF series, and praised the atmosphere that is increased by the virtual reality. While they mentioned the game has a good amount of content, however, they stated that the game is still sadly a title that one loves or hates, with no middle ground. They said that has a very poor gameplay and jumpscares that lose effectiveness in a long run, and the control system is not very precise as well.

Retrieved from "https://triple-a-fazbear.fandom.com/wiki/Five_Nights_at_Freddy%27s_VR:_Help_Wanted?oldid=26088"
Community content is available under CC-BY-SA unless otherwise noted.