Triple A Fazbear Wiki
Register
Don't have an account?
Sign In
Advertisement
in: Help Wanted, Mechanics, Special Delivery,
and 3 more

The player is also not allowed to use the lights and the monitor when wearing the mask, similar to the original FNaF 2.

In one of the additional DLC levels from Curse of Dreadbear, the Trick or

Treat minigame in the Spooky Mansion section, a Freddy Fazbear mask is provided to the player along with a Bonnie mask, a Chica mask, a Foxy mask, a Balloon Boy mask, and a Mangle mask. They are placed at the front door of the mansion. The player must guess who is going to open the door, and must wear the corresponding mask when the clock chimes and the door opens. If the mask is correct, they will close back the door and start the next round / end the minigame by giving lots of candies. The Mangle mask is only used when Mangle is at the window blocking the player's view.

There is also a Freddy Fazbear Mask given to the player as a prize for collecting 20 Faz Tokens. Once unlocked, the player can get the mask and use it at the Prize Counter.

In Special Delivery, the Freddy Fazbear Mask is added as a mechanic in the Christmas Update. It is required to and can only be used when dealing with the Toy Animatronics, Toy Chica, Toy Bonnie, Toy Freddy, and Mangle.

The icon of FNaF 2 challenge with Helpy using the mask. 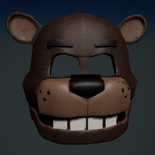 The icon of the mask from the Prize Counter.

A render of the mask without the middle peice in between the eyes.

Another render of the mask in Special Delivery.

Full view of the inside for the Freddy Mask

What it looks like when wearing the mask in game