Freddy and Friends: On Tour

Freddy and Friends: On Tour

Freddy and Friends: On Tour is a mini cartoon series made by Steel Wool Studios as teasers for Security Breach. The episodes released every two weeks starting on September 7th and ending on October 19th.

Each episode of Freddy and Friends follows the same general pattern. The trio of Freddy, Bonnie and Chica drive to a location, hide behind an object and walk over to Foxy. One of the characters will attempt to convince Foxy to join their band, only for him to raise his hook and scare the trio away, leading into a Scooby-Doo styled chase sequence that ends with Bonnie hiding in a plant. The cartoon ends with the trio unmasking Foxy to reveal his endoskeleton, and performing a short song before driving away.

The only differences between each episode are the backgrounds, which character speaks to Foxy, and the lyrics to the song the episodes end on. Each song always ends in the lyrics "Forever and Ever".

The fourth episode is the first episode to showcase new animation in the video. The plot follows the same story beats at the beginning, up until the chase scene. Where as normally the characters would have a Scooby-Doo style chase sequence, Freddy stops in place and offers Foxy a pizza asking him if he "Wants a hand" before laughing. It then skips straight to the singing sequence, with Foxy now joining with an accordion, and the episode ending off with Freddy, Bonnie & Chica walking off.

In each episode, around the mid-way point an image will be shown, and the end will show a clip of an animatronic. After the ending clip, the logo for Security Breach will appear with glitching numbers below it. With each episode, one of the numbers will freeze to reveal a release date.

In the first episode, the image was of the Nightmare Staff Bots and the message "AlphaZ 6 Groups". The end of the episode shows a clip of one of Blob's tentacles move across the screen. The second episode's hidden image showed Shattered Montgomery Gator, and the message "REV531". The ending clip in this episode showcases Sun transforming into Moon whilst manically giggling.

The third episode is the first to have three teasers, showing distorted images of Shattered Glamrock Chica & Shattered Roxanne Wolf, with only Roxanne's having a hidden message being "Z2E". As well as this, a large spider-like entity with gloved hands is seen at the very end of the episode, though only the legs and/or arms of the entity are scene. The character was later revealed to be DJ Music Man.

The teasers shown in the fourth episode involve close-ups of Vanessa's face, although she has yellow eyes instead of her usual green eyes. The video ends with Vanny getting extremely close to the screen and asking "Are you having fun yet?" As well as this, the entire episode is incased in purple static, with occasional yellow & purple glitches that when arranged in a certain way, make up a render of Glitchtrap[1]. 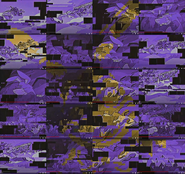