FNaF VR has very little merchandise. As of now, the only merchandise for the game are a few sets from Mcfarlane Toys, each based off a certain level from the game. These three mini sets released alongside many FFPS themed sets. 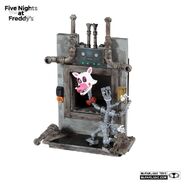 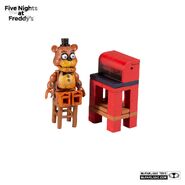 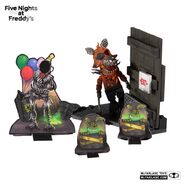 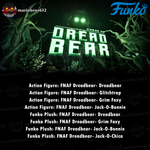 Recent leaks show that Funko will be releasing a Curse of Dreadbear wave, with actions figured for Glitchtrap, Dreadbear, Grimm Foxy and Jack-O-Bonnie. As well as this, there would be plushies for the same characters except Glitchtrap would be swapped out with Jack-O-Chica.

In May, the merchandise was properly announced, showcasing all that was listed above plus a figurine and plushie for Captain Foxy. Preorders became available on May 27th 2021. 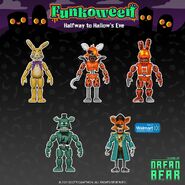 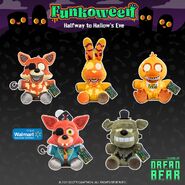 The Sweet Surprise Limited Edition Collection is a series of T-shirts and hoodies featuring Chocolate Bonnie. The collection launched on June 23rd, 2020. In addition, VIPs who had signed up for early access will have exclusive access two hours before its launch. This collection only has limited quantities available. 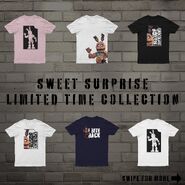 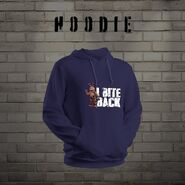 The Let's Play Launch Collection is a series of tanks, tees, long sleeves, and hoodies. Foxy, Balloon Boy and Springtrap are featured in this collection. The collection launched on June 23rd, 2020.

The Eternal Collection is a series of tees, long sleeves, sweatshirt and hoodies. The design of this collection is made to be simple and clean for everyday wear. The collection launched on June 23rd, 2020.

The posters and mugs feature promotional arts made for Special Delivery. These merchandises launched on June 23rd, 2020. 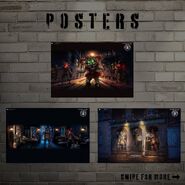 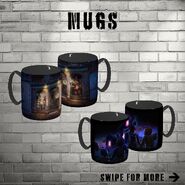 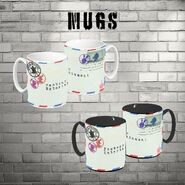 The Arcade Mayhem merch event is a limited edition merch line made in the theme of Arcade Mayhem Event skins. This collection launched August 3rd, 2020 and is currently unavailable.

A small merch wave was released on October 12th. It included some miscellaneous merchandise, including shirts, posters, stickers and more. It had 4 different collections; the Wasteland Bundle, the Inferno Bundle, the Retro Glitch Collection and the Chromatic Crew Collection. On November 18th, they returned to this collection to add a sticker to the Chromatic Crew collection. Later on, a mug was added to the Sizzling Summer collection along with some Christmas themed merchandise.

Along with Plushtrap's release, Illumix announced that Plushtrap along with the other Halloween Event animatronics would be getting their very own merch wave. Despite this, Plushtrap ended up being separated from the rest of the Halloween merchandise. Plushtrap also received an exclusive pin for Black Friday that came in limited quantities.

For a black Friday sale, the Jack-O's and Catrina Toy Chica got a small merch wave. Originally, this wave was supposed to be released alongside Plushtrap's wave, however it was held off until the week of Black Friday. Along with the Halloween merch line, a large line of merchandise was released for the game's first anniversary, including new renders of all the characters in the game (before Haunted Forest). This, so far, is the biggest merch event Illumix has ever done.

For the Christmas season, Illumix released a small merch wave included a Freddy Frostbear sticker pack, and a poster of Toy Chica & Frostbear's original teaser. The merch wave also featured some bundles of previous merchandise, including some new caps for previous characters. As well as this, they made a Gift Bag + Tumbler Set for the Anniversary merch line.

As the first merch release of 2021, Illumix released some merchandise for the Dark Circus event, featuring many shirts, hoodies & stickers themed after the Dark Circus. As well as this, two simple & unrelated hoodies were released, being just red or blue with the game's logo.

For Valentines Day 2021, Illumix released a small wave of merch based off the new skins and the old promotional art for Valentines day from when Toy Freddy first released. This line of merch is called the "Sweetheart Deals" line. This wave of merch was also released alongside a FNaF AR themed Water Bottle.

Recently, Funko revealed that they would be making merchandise for FNaF AR, including specifically plushies and figures.

Currently the only plushie shown Special Delivery is one of Freddy Frostbear. Along side them, multiple plushies for the new "Spring Colorway" animatronics were revealed to be coming soon. The Frostbear action figure was the first to be released, and was actually leaked on Ebay where they began selling them for $65.00 a piece. 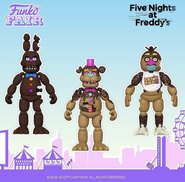 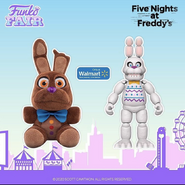 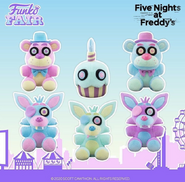 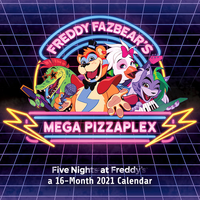 A 2021 16-Month calendar made by Trends was listed on Booktopia. Its cover features a cartoony style of Glamrock Freddy, Montgomery Gator, Roxanne Wolf and Glamrock Chica, and text reading Freddy Fazbear's Mega Pizzaplex, which is presumably the name of the location taking place in the game. It can be purchased at books-a-million. It mainly contains teasers for the images in the calendar 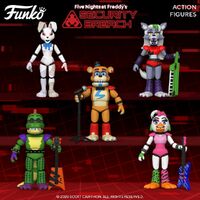 A series of action figures for Security Breach characters are made by Funko. These products are listed to be released on September 17th, 2020. The Security Breach line consists of Glamrock Freddy, Glamrock Chica, Montgomery Gator, Roxanne Wolf, and Vanny. 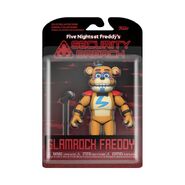 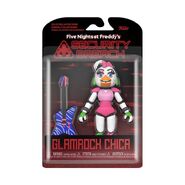 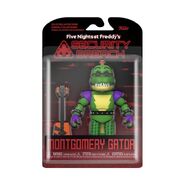 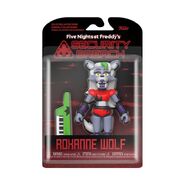 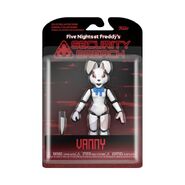 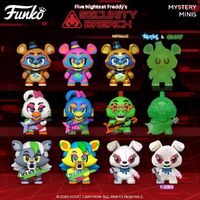 The Mystery Minis for Security Breach are made by Funko. The Mystery Minis series currently consists of Glamrock Freddy, Glamrock Chica, Montgomery Gator, Roxanne Wolf and Vanny. Some of the characters also have different versions, such as Blacklights, Metalic, Glitter & Glow, and Flocked.

Plushies of the Security Breach were listed by Funko, and made available for purchase on August 24th, 2020. The plushies currently consists of Vanny, Roxanne Wolf, Glamrock Chica, Glamrock Freddy and Montgomery Gator. In September of 2021, a 16 Vanny plushie was revealed as a gamsetop exclusive.

For unknown reasons, less than a day after the plushies were initially revealed and made available for purchase; each plushie except Glamrock Freddy was taken down, and all orders made on the other four were refunded. 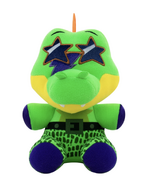 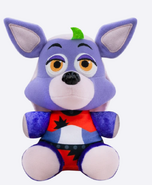 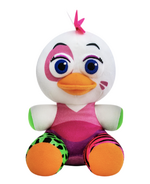 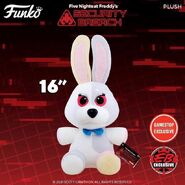 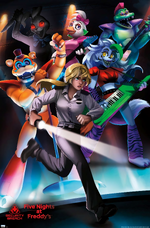 On August 8th, 2020, a poster was found on Trends International, featuring all the main characters in Security Breach: Glamrock Freddy, Roxanne Wolf, Glamrock Chica, Montgomery Gator and Vanny. The poster is available to purchase in Shops Trend, being 22.375" wide and 34" long, and is priced $19.99[1].

Scott and Funko worked together to make two 12 inch tall figurines to quote "try to win you all over again and prove we could design great looking products". The two figurines feature Glamrock Freddy, Gregory and Vanessa.

Ditto but the full figurine.

On October 14th 2021, a wave of Blacklight Slime came out themed around Security Breach, featuring Glamrock Freddy, Montgomery Gator, Glamrock Chica and Vanny. Strangely, unlike the first wave, none of the characters are recolored to be blacklight variants, and simply stay the same color schemes as their in-game appearances.

On March 26th, 2021, YouTooz announced during an AMA on Reddit, that they will be making figures for the Fazbear Fanverse alongside the original Five Nights at Freddy's series.[2]