This animatronic features a crescent moon shaped head, with half of it colored black to fill in the missing portion. It's face has a large nose and a large grin, coupled with it's two red glowing eyes, one of which is above the tip of its nose. Its hands are the same white color with dark blue fingernails. It wears two leather wristbands with ribbons coming off them, and a blue night cap and baggy pants covered in stars. His look mirrors that of Sun Animatronic's entirely. 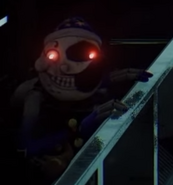 Moondrop as seen in the first trailer.

A poster of the animatronic labeled "Moondrop".

Moondrop seen taunting the player in the trailer. 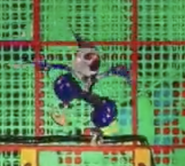 Ditto but zoomed in. 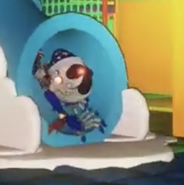 Moondrop coming down the slide.

A poster of Moondrop advertising his candy.
Add a photo to this gallery

Retrieved from "https://triple-a-fazbear.fandom.com/wiki/Moondrop?oldid=25968"
Community content is available under CC-BY-SA unless otherwise noted.