Nightmare Endo, as said before, is the endoskeleton of Nightmare Fredbear, as can be understood from his appearance and pose. He is a tall and massive metal skeleton with huge curved claws and razor-sharp teeth. Unlike Endo-01 and Endo-02 , he has very thick, complex limbs, specially extended in order to steadily hold a bulky body. He has five long, thumbs on his clawed hands, like other nightmarish animatronics , and on his back small steel vertebrae are soldered in a line.

The Nightmare Endoskeleton has an elongated head with a large mouth, with short but sharp white teeth set apart. On top of its head are two frames of large bear ears. The endoskeleton has glowing red-yellow eyes with metal lenses, rather small in relation to its build.

Nightmare Endo appears in the gameplay only once (except for its appearance in The Gallery) in the Ennard's Vent Repair level. It can be seen if you look under the grill, in the place where the player stands, however as soon as the light from the flashlight falls on the character , it will immediately disappear from sight, leaving no trace. 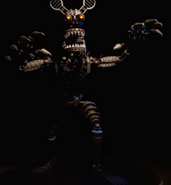 Nightmare Endo as seen in The Gallery. 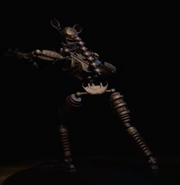 Ditto but from the back. 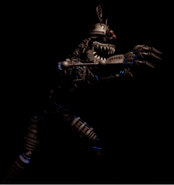 Ditto but from the side. 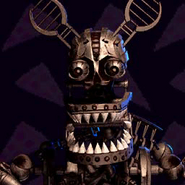 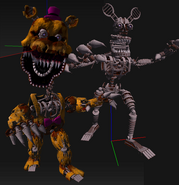 A reference view of Nightmare Endo next to the Nightmare Fredbear that appears in Ennard's vent repair.