Parts and Service is one of the segments in Five Nights at Freddy's VR: Help Wanted.

In this segment, the player acts as a technician and must repair the four original animatronics: Freddy Fazbear, Bonnie, Chica, and Foxy. The player has different tasks on each level, and must follow HandUnit's instruction correctly.

In this level, the player is required to clean both of Bonnie's eyes as well as adjusting his guitar's note that is out of tune.

Chica has been complained for having an acrid smell, and requires the player to clean out the food particles on her.

Freddy is seen holding a child's belongings, and needs the player to take them out.

In order to reopen Pirate Cove, the player must place all the correct fuses on Foxy as well as some animatronic parts.

Each level has different changes in Hard Mode. In Bonnie's level, the room is filled with colorful lights and loud music to confuse the player when retuning the guitar's note. In Chica's level, the room becomes a lot darker, and gigantic glowing spiders can be seen roaming around the room. Chica's cupcake now becomes the Nightmare Cupcake as well. The chemical spray can't work the second time, meaning the player must grab the cockroaches, which are now spiders, inside Chica manually while catching the cupcake.

In Freddy's level, Freddy becomes similar to Shadow Freddy. The room also takes on a different scenario static monitors, random objects, and Freddles can be seen around the room. The room becomes black and white now as well. In Foxy's level, the room is filled with fire and smoke, and Foxy has a burnt texture. The fuses switch their color from time to time, meaning the player now need to find the right timing to put in the fuses when it's the correct color and when Foxy is not moving aggressively. 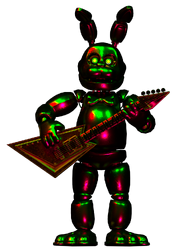 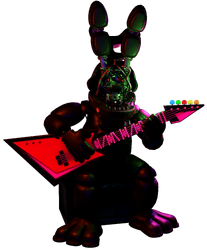 Neon Bonnie as seen in Parts and Services. 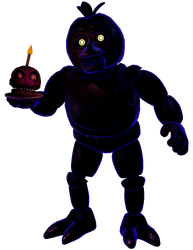 Neon Chica and the Nightmare Cupcake's full body as seen in hard mode.

Neon Chica as seen in Parts and Services. 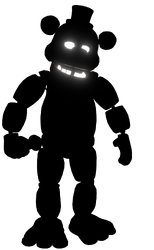 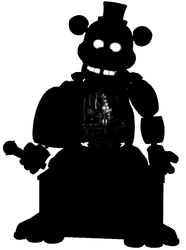 Dark Freddy as seen in Parts and Services. 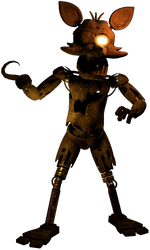 Burnt Foxy as seen in Parts and Services.

There are 10 tokens found in this segment. These tokens are located:

There are 3 tapes that can be found in this segment. They are placed:

The animation of Freddy's chest opening up.

The animation of the safety latch from inside Freddy's chest.

An animation of Chica's Cupcake jumping around.

Foxy turning his upper body around.

The animation of Foxy moving his arm.

A full body render of Foxy with his battery sockets in.
Community content is available under CC-BY-SA unless otherwise noted.
Advertisement