Phantom Balloon Boy's model is almost identical to his appearance in Five Nights at Freddy's 2, the only difference being that he is tinted a dark, burnt greenish color. His eye sockets are black with glowing white eyes in them. For unknown reasons, he is now missing his legs as well as his nose. He is also capable of stretching his jaw, despite being made of plastic.

Phantom Balloon Boy only appears in the FNaF 3 sections. Phantom BB will randomly appear on the cameras, requiring the player to quickly switch cameras. Failing to do so will result in a non-fatal jumpscare and a ventilation error. 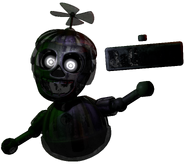 Phantom BB seen on the camera. 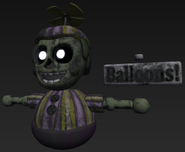 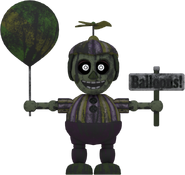 A render of an unused completed version of Phantom BB