Phantom Foxy is mainly burnt green in color with multiple black burn marks streaking around his body, similar to the other Phantoms. He has black scleras, white semi-irises and white pupils.

In Help Wanted, he has a major appearance change, considering using the classic Foxy's model rather than Withered Foxy. Has a more greenish skin rather than the original burnt maroon color and has no legs, leaving his feet and his body in mid-air.

He appears as a hallucination or distraction on the FNaF 3 Section which he debuts on Night 2. Similar to the original Five Nights at Freddy's 3, the player must avoid staring at him. If the player looks at him for just a moment too long, Phantom Foxy will give the player a non-fatal jumpscare, and a ventilation error.

Phantom Foxy seen staring at the player in the office

Alternate render made by RamChoops. 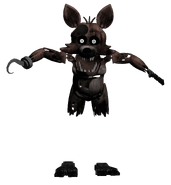 Another alternate render of Phantom Foxy, about to jumpscare. 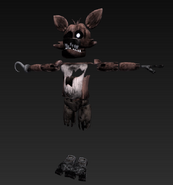 Retrieved from "https://triple-a-fazbear.fandom.com/wiki/Phantom_Foxy?oldid=23364"
Community content is available under CC-BY-SA unless otherwise noted.