Triple A Fazbear Wiki
Register
Don't have an account?
Sign In
Advertisement
in: Characters, Freddy In Space 2

Poopet Master is one of the bosses in Freddy In Space 2, he is a secret boss of Lunar Mines, rewarding the player with the Balloon Boy Trophy.

Poopet Master is a floating human head with brown hair, with an odd shape, and it's jaw separated from the upper part. His face is painted white, with red lipstick and purple stripes, resembeling tears and two rosy red cheeks, this being the same as the Marionette's face.

Poopet Master is an hard boss to fight at low levels, and should only be challenged if very well prepared. Poopet Master can only be damaged on the top part, but can deal damage with both the top and bottom parts, so Chica is a very useful character to fight Poopet Master with. Jump when he has his jaw open almost all the way through, and damage the balloons as they appear so they blow up and aren't much of a problem. 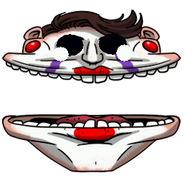