These animatronics are much more humanoid, futuristic and sci-fi than previous characters. Their bodies look very segmented, with the torso being very small, and the "legs" being a tower with two large wheels. The robots also seem to have the word "Staff" painted on their backs. The color scheme of the robots seem to very depending on their jobs, with the Barista robot being off-white with blue accents and large orange cheeks, and the Waiter robot being white & black with pink accents.

As well as this, one waiter robot is seen wearing a large sombrero, implying that it works in a Mexican restaurant. 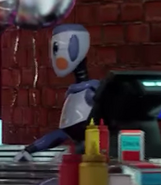 The Waiter Robot.
Add a photo to this gallery
Retrieved from "https://triple-a-fazbear.fandom.com/wiki/Service_Robots?oldid=26045"
Community content is available under CC-BY-SA unless otherwise noted.