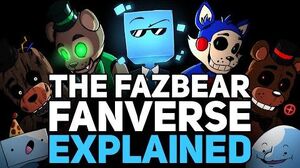 The Fazbear Fanverse Initiative is a project by Scott Cawthon, collaborating with several Five Nights at Freddy's fan-game creators. The fan-games involved in this project are funded by Scott, and will be bundled with other games from the same series, including the classic versions, remakes and spin-offs, and ported to major consoles and mobile (some with help from Clickteam). Several toys and merchandises based on the fan-games will also be made.

There are currently 5 fan-games involved in this project as an initiative. More fan-games may be added, as Scott stated, if the project goes well.

The game will be released along with the Remastered version of the first game and FNaC 2 & 3 on console and mobile as well. These games will be updated with visual changes, more fair and balanced gameplay, and less bugs and glitches.[2]

The Joy of Creation: Ignited Collection

The Joy of Creation: Ignited Collection will be using Unreal Engine 5[3], and it's possible it will have raytracing[4], but it is unknown which implementation it will use.

For more information about the POPGOES series, visit the The Popgoes Pizzeria Wiki.

POPGOES Evergreen is an upcoming FNaF fan-game developed by Kane Carter (with help from other people, one of them being Macko). It is a remake of the original POPGOES as well as the reboot of the series. Evergreen (Along with Arcade) will receive paid expansions when released on steam, these expansions will be bundled with the cost on console

The game will be bundled with an expanded version of its prequel, POPGOES Arcade, when being ported to consoles.[5]

A bundle of the One Night at Flumpty's series consisting of the trilogy series will be released on consoles and mobiles with the porting handled by Clickteam. As part of a bundle, the original One Night at Flumpty's 1 and 2 is updated as well, the copyrighted characters in the game is removed or replaced, and a Hard Boiled Mode is included as well for the first game. The updated version of the games were released on Game Jolt on August 22th, 2020. Jonochrome said on Twitter that the game is "more or less finished" and is just waiting for the ports to be done so they can be released at once. The game released on October 31st 2021 at exactly Midnight.

Five Nights at Freddy's Plus

On August 22nd, 2020, Scott announced "The Fazbear Fanverse Initiative" on Reddit, explaining the project and listing out the fan-games included in the initial line-up.[8] This also announces the other 3 games in the project, The Joy of Creation: Ignited Collection, One Night at Flumpty's 3, and an untitled reimagined version of Five Nights at Freddy's (later known as FNaF Plus) It was also confirmed by Nikson that the fan-game makers with the exception of Phisnom share the copyright of the games,[9] and confirmed by Emil the Clickteam games will be handled by Clickteam as the same for the other ports of the games.[10]

On March 26th, 2021, YouTooz announced during an AMA on Reddit, that they will be making figures for the Fazbear Fanverse alongside the original Five Nights at Freddy's series.[11]

On January 21st 2022, Kane Carter announced that Candy & Popgoes would be getting Funko plushies around Fall of 2022. Weeks later, both Kane and Emil released mini updates on the development of their Fanverse games, with Emil's having a small hidden message in it saying "DontForget".[12][13]