Triple A Fazbear Wiki
Register
Don't have an account?
Sign In
Advertisement
in: Fury's Rage, Security Breach, Characters,
and 3 more

Vanessa is a young caucasian woman with freckles on her face and blonde hair. Her eyes are colored green, but on some occasions will turn yellow. She wears her hair in a ponytail and has purple nail-polish on her fingernails. She wears a white button-up shirt with black shoulder-pads and a black security emblem on the left side. She also wears a black cap that reads "Security", black pants and brown tennis shoes. Finally, she has a gold security badge on her belt.

Vanny wears a large white rabbit suit with large glowing red eyes, long whiskers and a large blue bowtie. Parts of her suit use different fabrics than the base white fabric, with the left side of her face, half her left ear, most of her right leg, her right hip, the left side of her chest and her right hand & forearm are all grey. Her left ankle & foot and her right ear are a pale yellow, and her left hip, most of her left thigh and her left hand are a red & black plaid fabric. All of the differently colored parts are stitched to the main suit with a white thread.

Vanny is the presumed main protagonist of Five Nights at Freddy's VR: Help Wanted. At the end of the original game, Glitchtrap attempts to possess her in order to escape from The Freddy Fazbear Virtual Experience and into the real world. He partially succeeds, gaining influence over her as a voice in her head. Her voice is only heard through her white mask that is found in the Corn Maze's secret area. By wearing her mask while looking at Glitchtrap's plush form, she tells him that she is preparing everything, that he has told her with no problems, and no one suspected anything about their plans. She also tells him that she made her mask for him while hoping that he likes it, and tells him that everything will be ready for the "fun." Despite her words, she sounds fearful of him and hesitant to follow his orders, hence her name "Reluctant Follower."

In the unused E-Mails, Vanessa was an employee of Fazbear Funtime Service working as a security guard for the company. After she was contacted by one of the game developers from Silver Parasol Games, after they accidentally created a virus from one of animatronics' PCB. She pretended to be a Senior IT Representative from Fazbear Entertainment to trick them into giving her full access to their company to get rid of the virus. After believing that Vanessa got rid of the virus, Silver Parasol started working on the The Freddy Fazbear Virtual Experience again, only for for Vanessa to give unauthorized commands to their system, gaining full control over their system. She locked every employee out of their account. It's implied that she got everybody at Silver Parasol's warehouse killed by the animatronics.

After receiving an e-mail from Vanessa's fake credential, "_pizzaplex", it is revealed that Vanessa was researching the company's records of the Fazbear Entertainment Floor 3 employee, and that she transferred from Fazbear Funtime to work as a security guard at Freddy Fazbear's Mega Pizzaplex.

In Security Breach, Vanessa acts as a minor threat that the player only encounters in one area. After escaping the Lost and Found area, Vanessa can be found patrolling Rockstar Row. Outside of this minor encounter, Vanessa only appears in in-game cutscenes, where she can be found speaking with Freddy.

As for Vanny, she will occassionally appear and hunt the player down. She acts similarly to the Glamrocks, but adds a distortion effect to the player's screen, making it harder to see when she's close. Vanny appears very rarely and only in certain sections of the game. Vanny also acts as a sort've timer for the player to escape the Lost and Found office, as if they don't escape in time, Vanny will enter the room and kill them.

However, within the debug menu a "Vanny Meter" can be found where it's shown that Vanny was originally intended to show up if the player spent too much time in one area. As revealed by Ray McCaffrey, it was left in the debug menu due to being a part of a larger mechanic that was scrapped earlier on[1], but the team has plans to revist the mechanic in the future.[2]

I will.
Focus on my voice.
I will.
Don't let anyone lead you astray.
I won't.
Have you selected one?
I have. 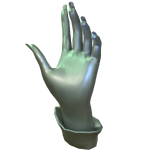